Separation of protein complexes of the Thylakoid membrane (Aradidopsis thaliana) 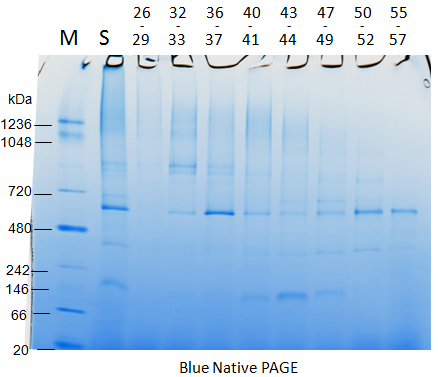 Protein Complexes from the Thylakoid membrane of Arabidopsis thaliana were separated by iZE at 1600V for 4.5 Minutes.

2. The importance and influence of the optimum detergent

On a second approach, the influence of different detergents was evaluated on the same extract of Thylkoid membranes of Arabidpsis thaliana. Here the detergents Digitonin, Dodecylmaltosid (DDM), and Lithiumdodecylsulfat were added to the sample and to the separation buffers.

All shown separations are on file at FFE Service GmbH. The separations published in this section were conducted in collaboration with Prof. Lutz Eichacker, University of Stavanger.